Difference between JDK, JRE and JVM 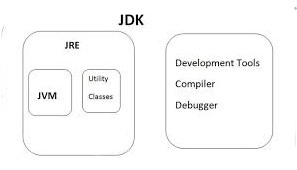 If we are a Java developer, it is very often that we think about understanding the JRE,JVM and JDK. It would be quite easy for us to visualize things in logical manner. Let’s see the basic differences between the JDK, JRE and JVM.

You need JDK, if at all you want to write your own programs, and to compile them. For running java programs, JRE is sufficient. JRE is targeted for execution of Java files i.e. JRE = JVM + Java Packages Classes(like util, math, lang, awt,swing etc)+runtime libraries.

JDK is mainly targeted for java development, i.e. we can create, compile and run a java file.

Java Runtime Environment contains JVM, class libraries, and other supporting files. It does not contain any development tools such as compiler, debugger, etc. Actually JVM runs the program, and it uses the class libraries, and other supporting files provided in JRE. If you want to run any java program, you need to have JRE installed in the system.

Implementation of JVMs are also actively released by other companies.

If u just want to run java programes, JRE needs to be installed on the machine.

As we all aware when we compile a Java file, output is not an executable file but it’s a .class file. .class file consists of Java byte codes which are understandable by JVM.

Java Virtual Machine interprets the byte code into the machine code depending upon the underlying operating system and hardware combination. It is responsible for all the things like garbage collection, array bounds checking, etc. JVM is platform dependent.

JVM, JRE and JDK are platform dependent because configuration of each Operating System differs. But, Java is platform independent.

The JVM is called virtual because it provides a machine interface that does not depend on the underlying operating system and machine hardware architecture. This independence from hardware and operating system is a cornerstone of the write-once run-anywhere value of Java programs.

There are different JVM implementations are there. These may differ in things like performance, reliability, speed, etc. These implementations will differ in those areas where Java specification doesn’t mention how to implement the features, like how the garbage collection process works is JVM dependent, Java spec doesn’t define any specific way to do this. 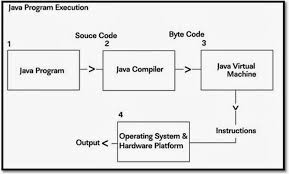